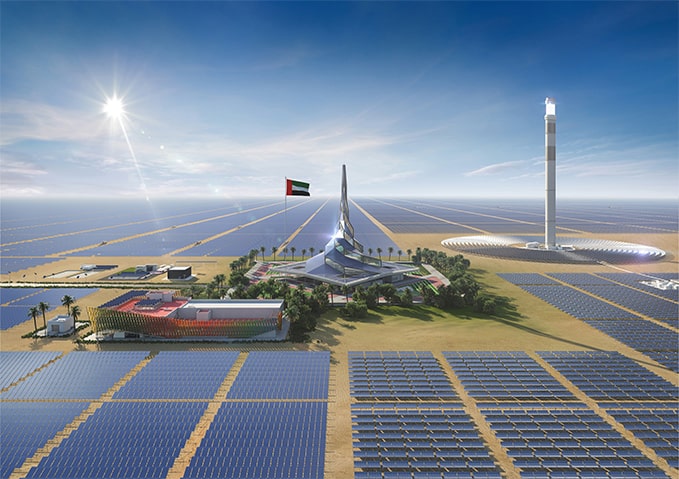 Dubai's Sheikh Mohammed bin Rashid Al Maktoum Solar Park is the largest single-site solar park in the world. The solar park is expected to generate 5,000 MW by 2030. In May 2021, it hosted a unique, Green Hydrogen project, the first of its kind in the Middle East. The project houses the region’s first solar-energy-driven hydrogen electrolysis plant. The best part about green hydrogen is the fact that it’s cheap. Right now, reports suggest that it costs $2 per kg, and that cost is falling fast as clean energy projects like the one at the Al Maktoum Solar Park take off. What’s happening in the Middle East? Is the region trying to be the brightest polestar of renewable energy? Well, yes, if things go according to plan. Renewable energy initiatives are kicking into top gear all across the region. The United Arab Emirates, for instance, was the first Middle-Eastern nation to sign the 2016 Paris Agreement. The UAE has also committed to cut carbon emissions by 24% in the next five years. They’re also planning to increase their clean energy usage to 50% by 2050. The UAE is aiming at a whopping 70% reduction in carbon emissions resulting from power generation— by 2050. And the European Union has been quick to react. Companies like Siemens and EDF have shown interest in green hydrogen projects across the region. Like Siemens’ involvement in the Sheikh Mohammed bin Rashid Al Maktoum Solar Park, EDF is working on a solar plant with the Saudi Government. EDF’s project in Saudi Arabia is a 300 MW solar plant built in partnership with Abu Dhabi’s renewable energy company Masdar and privately-owned Saudi firm Nesma Co. The French state-controlled company is also working on a 400-MW wind farm project at Dumat Al-Jandal — also in Saudi Arabia. Despite being an ‘oil miracle’, the Middle East has quietly started to pivot its energy sources. The International Renewable Energy Association, a UAE-based energy think-tank, estimates that the Middle East saw a 5% year-on-year increase in renewable energy usage.  The region only contributes a tiny 0.87% to global green energy usage. But that number is about to increase because of President Joe Biden’s interest in backing green technologies in the Middle East. “The Middle East, the Gulf countries, in particular, look to the U.S. for guidance when it comes to technological developments," said Frank Wouters, Director of the EU-GCC Clean Energy Network, a European-Union-funded initiative for EU-GCC strategic clean energy cooperation. "The climate plans have a very strong technological angle because the energy transition pivots around technology development, whether it’s building technology, solar panels, wind turbines, water electrolyzers, electric or fuel cell vehicles, consumer goods, etc." The U.S., with this forward-looking policy initiative, is likely to become a powerhouse for future energy technology," he added. His Highness Sheikh Mohammed bin Rashid Al Maktoum said he dreamed of Dubai having the smallest carbon footprint in the world. He also decreed that 75% of all the energy in the city will come from renewable sources by 2050. Is it possible? It’s already happening. Go visit The Sustainable City and see for yourself. With the region’s resources and the right technology, anything is possible. Disclaimer: This information represents the personal views and opinions of the author(s). It does not represent the views and opinions of UN GCNI, UNGC, SOCIOLADDER FOUNDATION, THE SUSTAINEVERSE PLATFORM, or any other third party including sponsors, strategic partners, or other users of SUSTAINEVSERSE. While UN GCNI and SOCIOLADDER  strive to make the information on the SUSTAINEVERSE Platform as timely and accurate as possible, they make no claims, promises, or guarantees about the accuracy, completeness, or adequacy of the contents. Any views or opinions expressed are not intended to malign any religion, ethnic group, community, organization,  company or individual.