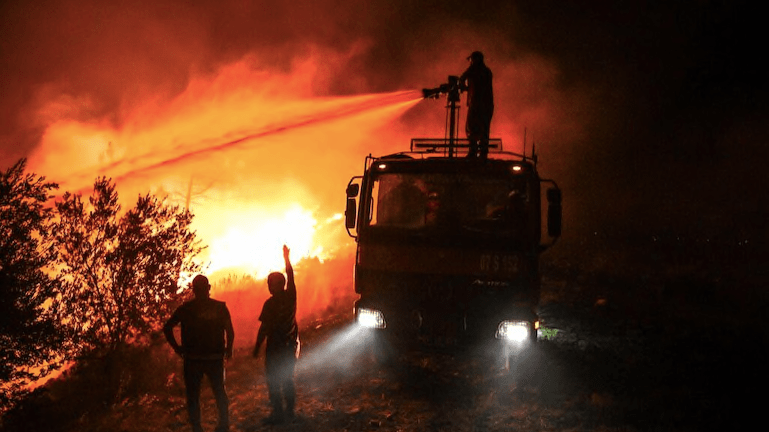 2021 will be called the Year of the Air Conditioner because A/C units are the only shield against the melting-hot temperatures we are going to experience this summer. While people living close to the equator and in places like South East Asia won't be complaining about the heat, North Americans and Canadians are in for a seriously hot summer in 2021. Across the North American landmass, there's a new geographical phenomenon developing, it's called a heat dome and is caused by the trapping of hot air by the landmass and the sea. It's simple really — hot air from the atmosphere mixes with the cooler sea breeze, in turn, heating the sea and then the land. Now, what if the temperature of the sea breeze kept rising every year? Then you'd already have hot air from the land mixing with hot air from the sea and that's what gets you sweating. The main culprit? You guessed it — global warming, and not just of the landmass, the seas are feeling the heat too. This begs the question — why are the oceans getting hotter? Water is supposed to absorb heat, right? Well, yes, but here's where greenhouse gas emissions come in. According to studies, the ocean had absorbed more than 93% of all emissions since the 1970s. As a result, scientists are seeing rising temperatures at depths of up to 1000 ft. below the ocean surface. Since water spreads heat in the form of convection currents, the hotter portions rise up to the top as fast as they sink to the bottom, affecting all life at the sea depth. In the diagram above, you'll notice how crucial ocean warming is. Warmer oceans will cause even more drastic climatic changes over the next 100 years. Hotter sea breezes will cause droughts and heat domes close to coastal areas, resulting in weaker precipitation in countries with long coastlines like India (4700 miles). Island nations like Australia will be affected much worse. The rising temperatures will also result in increased flooding in areas earlier protected by mangroves. The flooding will affect agriculture and generally harm food production all over the world. Oh, and before we forget, the ocean feeds about 15% of the Earth's population. And, because of the rise in temperatures, plankton density will reduce, and fishing will be affected. The problem is this — you can only count trees. As a result, ocean warming isn't receiving its share of the research dollars. Whether it's emission-free shipping or slow steaming where the wind currents are the strongest, there are solutions that need effort — and money. One idea is to work with coastal authorities to build ocean-friendly settlements. To make it work, we’ll have to change the way people work, eat and live on the coast. Smart oceanic settlements that include sustainable energy, circular economies, and environmental employments will have to be built. But, If we don't do something about it, we're in for big trouble. Disclaimer: This information represents the personal views and opinions of the author(s). It does not represent the views and opinions of UN GCNI, UNGC, SOCIOLADDER FOUNDATION, THE SUSTAINEVERSE PLATFORM, or any other third party including sponsors, strategic partners, or other users of SUSTAINEVSERSE. While UN GCNI and SOCIOLADDER  strive to make the information on the SUSTAINEVERSE Platform as timely and accurate as possible, they make no claims, promises, or guarantees about the accuracy, completeness, or adequacy of the contents. Any views or opinions expressed are not intended to malign any religion, ethnic group, community, organization,  company or individual.